Materials:
ensemble score (including the text of an Adorno speach)
the 12 instrumental parts
this preface (containing also the instructions for the 2 musicologists and the solo-bassoon)

Additional Materials:
a simulation of the 4 ensemble sections in mp3
the source material for the 4 sections (Adorno plus Vivaldi-Karaoke) in mp3
the score of Vivaldi's Bassoon-Concerto in Bb-Mayor, "La Notte", RV 501 (scanned)

The exact timing could be taken more free as well, but rather to make the whole piece longer than shorter. In this case the minutes-indications would function like "bar numbers" or rehearsal marks. 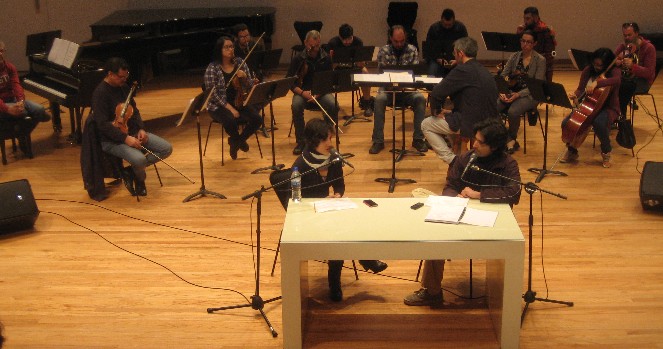 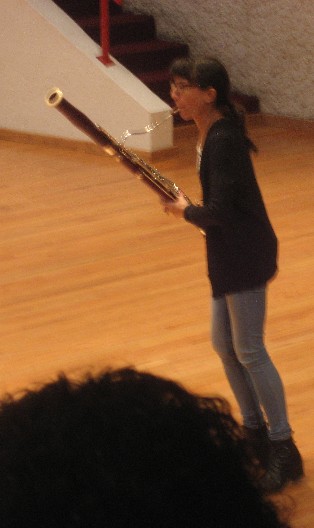 Lights: 3 different light-situations according to the appearance of the 3 layers of the "Concerto" (see general scheme). Therefore the ensemble is in the dark before 15' and after 27'. And the bassoon-light which is also the audience-light should not be too soft: between 12' and 30' the audience should be (sort of) exposed as well!

The ensemble part is fully notated. The staff in the score called "Adorno" is NOT performed! It is just giving informations about one layer of materials that were used to create the ensemble part (see below).

Accents are usually indicating one dynamic step higher (an accent in p = mf, an accent in mf = f, etc.); only in 'Parte 3' the accents for the long notes are different and indicate a bell-like dynamic shape, with a precise attack and a softly fading decay. Otherwise dynamics can be highly indiviualized, and for a single moment the loudest note can also come from violin 3 or 4 etc. The conductor shoud encourrage such un-even dynamic profile.

The 2 musicologists and the solo-bassoon are acting freely and improvised with some specifications:

Specifications for the 2 musicologists:

The 2 musicologists should be either true professional musicologists or theorists with the ability to discuss and reflect musical concerns in a public situation. The 2 will have a discussion and will talk throughout the piece. The topics are mostly self-referential and have to do with the situation they are part of. The general scheme lists 7 main topics, each of them dominating the discussion for about 6 minutes. (But this does not mean, that later topics cannot appear within earlier situations, or that the same issues could not come up again within different contexts; e.g. "Vivaldi" or "Adorno" may be mentioned already much earlier, or the "solo-part" can be subject in one or another way during all the 18 minutes of the solo-bassoon's activity.) 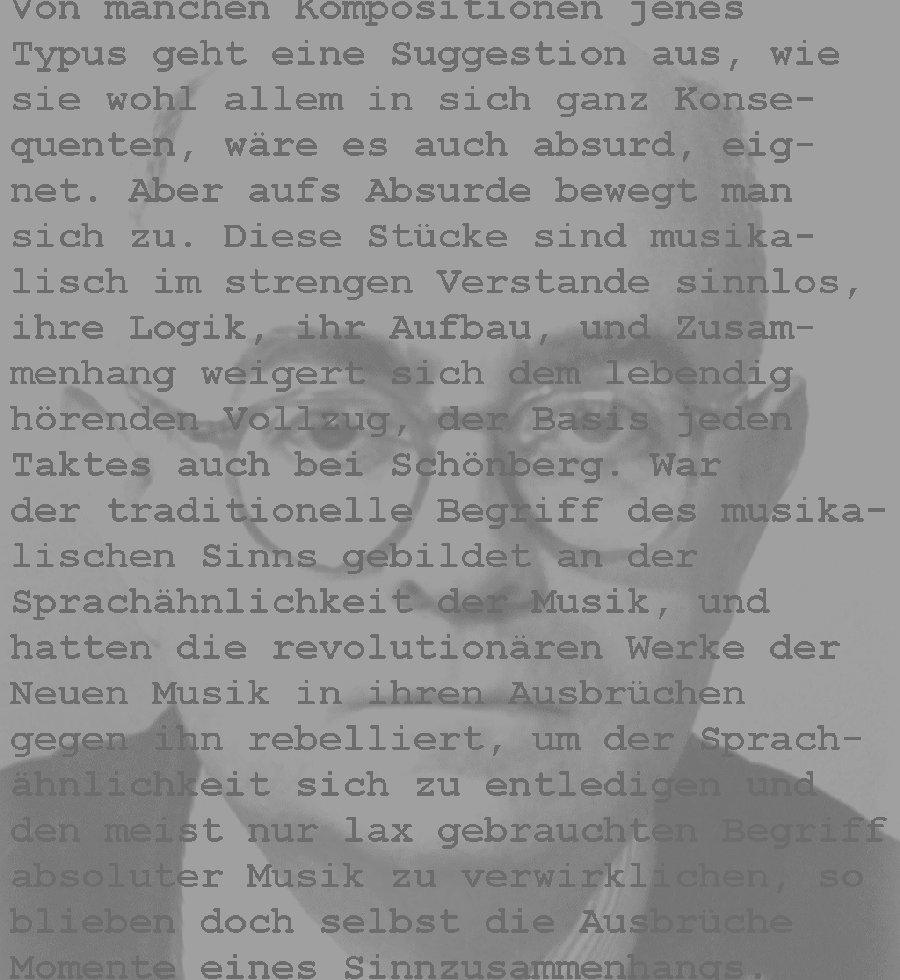 the topics in detail:

"the concert as such": start maybe with a short welcome towards the audience; than the first subject could be the history of the concert; also its historicity; and the question about its relevance today; etc.

"the actual concert": the discussion could refer to the title of this piece, it could explain its set-up, and also the fact that the function of the 2 speakers is not an explanatory pre-talk/preface but is itself the "Concerto", etc.

"the solo part": this could again refer to the historic "dialectics" of soloist and orchestra; and/or it could explain the actual activities of the soloist in this piece (see below); also the actual performer of the solo part, the person herself, could be discussed; etc.

"the ensemble": here you could talk as well about the actual performing ensemble; or again about the historic role of the "orchestra" as couterpart to the soloist in a concerto; or you could start talking/explaining what the actual ensemble part is made from (see below), etc.

"Antonio Vivaldi": One layer of the ensemble part is Vivaldi's Bassoon-Concerto in Bb-Mayor, "La Notte", RV 501; or, to be more precise: it is the concerto without the soloist, therefore a sort of Vivaldi-Karaoke; the other layer is a section of a speach by Adorno. Both materials were used simultaneously as basic material to generate the ensemble-score, which is a frequency-analysis of Vivaldi + Adorno; etc. (see below)

"Theordor W. Adorno": The speach in use is "Das Altern der Neuen Musik" ("The Aging of New Music") from 1955, in which he attaccs post-war serial music from a quite conservative standpoint, complaining the loss of "Musiksprachlichkeit", the concept of 'music as language', which for him is the only sense-guaranteeing concept, as it was true from Beethoven to Schoenberg; I need to add here: one of the reasons for combining this speach with Vivaldi was, that Vivaldi (for me) has not yet fully arrived at the concept of 'music as language', while post-war music is about leaving it; therefore both, Vivaldi and Adorno mark a position short before and short after 'music as language'.

Together with the indicated Adorno speach in the score it would be possible to quote some phrases of the speach - theoretically it would be even possible to do that in "real time" - in german, and at the spot, when the ensemble actually plays the transformation of the same speach (e.g. the beginning of Parte 3 might be an oportunity to successfully following the speach for a moment).

"speaking about music": this subject could turn to your own role, both in this piece, but also generally, about your profession; it could be a discussion of the problem how to verbalize music; etc.; the end of the section and the piece could be a short good bye towards the audience ("thank you for your attention, good night").

For a better understanding of the relationship between the mentioned source materials (Adorno and Vivaldi) with the resulting ensemble score, i have prepared a (not very representative) simulation of the 4 ensemble sections; and i also have added the source material of this 4 sections. If you listen e.g. to the beginning of a section with source-material and than compare it with the same section of ensemble-simulation you should be able to somehow detect the relationship of the two. If you have an audio editor you could even layer simulations with sources and listen to both at once. Studying these materials would be a recommendation for both, the 2 speakers and the soloist to prepare and get ideas and context for your role in the piece.

During the passages when the ensemble is playing it might be difficult to continue the discussion, as the ensemble's general character is relativly dense and loud. The volumes of the microphones should NOT be turned up that high to make sure that everything remains understandable. In opposition some erasure of the speach is intended, which means to set the levels of the microphones precisely so, that it is not any more possible to follow the content of the speach during the ensemble section, while some of its sonic properties (e.g. the rhythm of speach) still can be heard. (Only the musicologists themself need to understand each other also during the ensemble sections; they should be able to continue speaking at any time without interruption. If the loudspeakers cannot be set that way, use monitors for the 2 speakers.)

By rehearsing the part of the 2 musicologists (too much) you might loose spontaneity for the actual performance. Therefore it might be an advice to do the rehearsals more in a stereotyped and schematic way, while keeping your more subtle arguments for the performance. In the performance try to surprise each other with new topics and details; also do not always agree with each other. "Concertare" also means "dispute"/"quarrel"/"contest".

The main subject of the solo improvisation will be a series of "Audience Portraits". Secondly also the topics "Speach" and "Vivaldi" should be part of the solo. (Please, read also the 'Specifications for the 2 musicologists'.)

"Audience Portraits" means, the soloist walks with her instrument towards an individual member of the audience and performes a short portrait of the selected person. During the 18 minutes of appearance the soloist should have portrayed a longer series of different persons.

A very simple interpretation of such audience portraits is taken here from the piece "Instruments & (Sketchbooks)": Interpret the silhouette of the chosen person: Usually a (somewhat irregular) line or gliss upwards and downwards for each person.

But the idea of "Audience Portraits" is certainly open for more sophisticated interpretations, like finding a specific sonoric colour or atmosphere for each person, etc.

While "Speach" and "Vivaldi" is refering to the sonic content of the "Concerto", the audience is (usually) a less sonic, but still constituting contribution within a concert. Therefore the soloist is creating some sort of sonification of this ("silent") part.

Also "Speach"- and "Vivaldi"-interactions by the soloist are performed from the audience area.

"Speach" can refer to both, the 2 speaking musicologists - and at some points the 2 might even speak about the soloist herself - but also to one of the 2 layers of the ensemble part, which is the Adorno speach and its translation into ensemble music (see above).

"Vivaldi" at first is refering to the mentioned bassoon concerto. The soloist could (somehow) react to or work with the material of the Vivaldi score (a scan from which is added as well). Whether or not this could mean recognisable quotations of the Vivaldi concerto is not decided here. Together with the knowledge of the source material and its "Vivaldi Karaoke" it would theoretically even be possible to (more or less) exactly fit in excerpts or hints of the Vivaldi-solopart (or any transformation of it) in the right spot.


for score and material, as well as for further informations, contact the publisher: