Echtzeit (Real Time)
from: "Instruments &"
for separated cello and delay


Written for the Sumpfhahn Galery in Berlin, or for a situation in which the cello-player is acoustically - but not visually - separated from the audience.

This could be two adjacent rooms separated by a large bottom-to-top window, or a galery with a large window that goes directly to the street. The instrumentalist then would be inside, the audience outside.

The loudness of sound-projection is not too loud: in no way louder than the original sound. 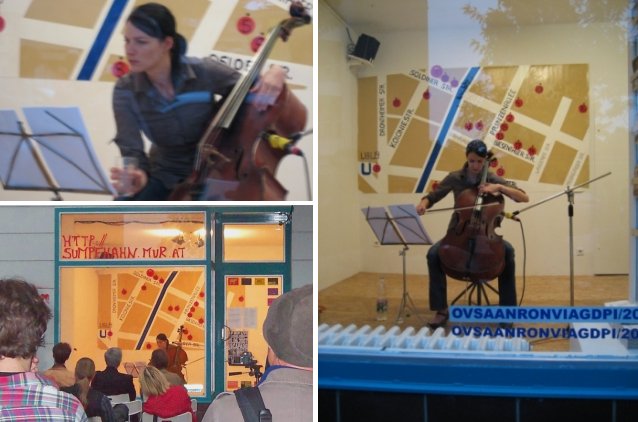 
Before the performance the performer's room is empty, except the microphone, a mixer and/or amplifier, the cello packed in it's suitcase, a chair, a notestand, and maybe a bottle of water.

The performer does not know the score (except this foreword) and will receive it only directly before the performance and in front of the audience.

Performance beginn: The performer receives the score, enters it's room, turns on the mic-amplification, and follows the instructions in the score.

(Preword from the score, originally written in english, edited by James Orsher.)

german and english preface for the score