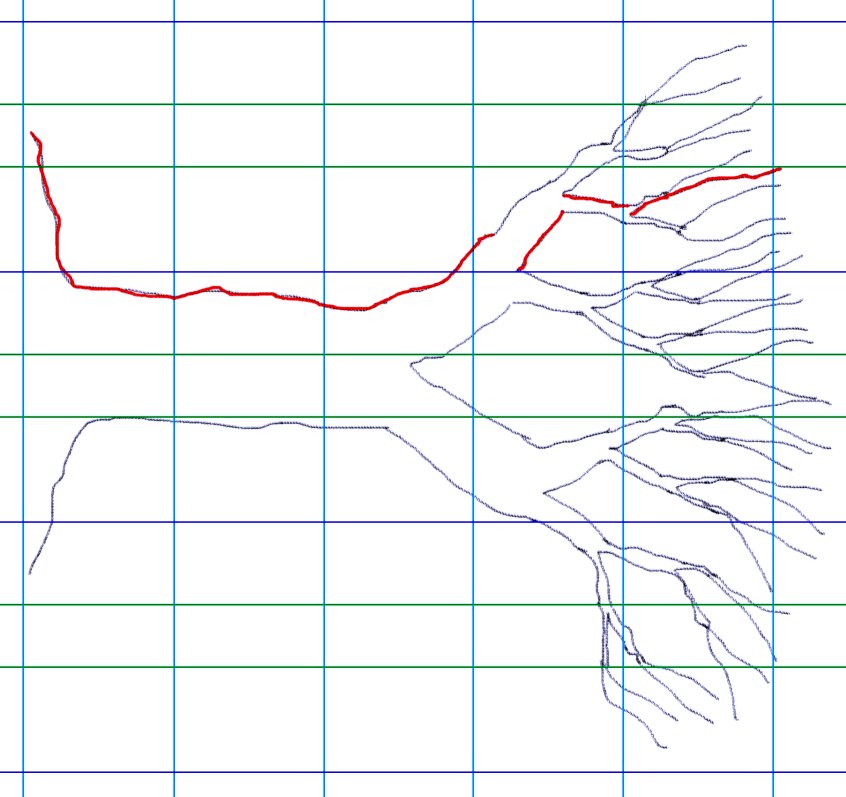 It all started with a rejection. Flutist Erik Drescher applied for a cooperation with me at the end of 2019. Initially it was supposed to be a kind of continuation of our joint 2014 CD "Augmented Studies", especially an extension of the multi-track pieces for (then) 16 or 22 flutes. The rejection came in February 2020. Then came Corona. We both had nothing to do and so we decided to start our project - unfinanced, of course. 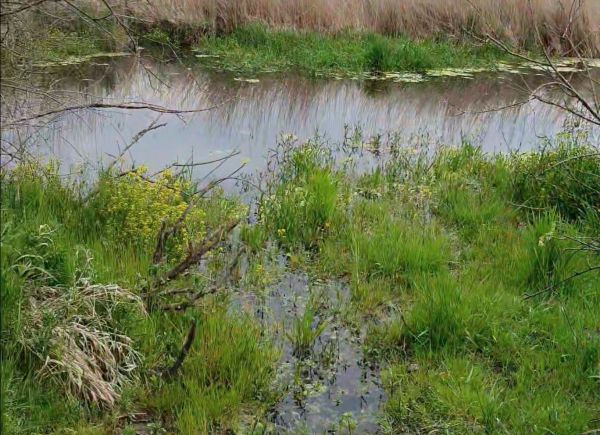 At the beginning of May on a trip to Brandenburg my wife Siegrid Ablinger made a recording at a toad pond. The toads [a certain species of them: 'bombina'] became the starting point for the entire piece and were initially also its working title (german: "Unken"). Both the sonic-rhythmic articulation and the "heterophony" ('similarities, simultaneously') became the structure generator for everything that followed. 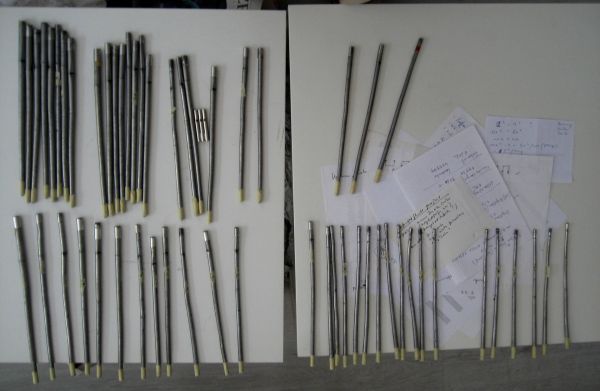 In addition to the idea of polyphonic layering, there were two further basic assumptions: On the one hand, the flute spectrum should be expanded upwards and downwards (also beyond piccolo or bass flute). For the height I bought used organ pipes, the 1-foot register of a no longer existing organ, which - depending on age - reaches the ultrasonic limit (highest tone f6, approx. 11KHz). For the depth I got bottles (lowest tone CIS, approx. 69Hz). So a total of 7 1/2 octaves - that's more than a symphony orchestra. And then the other basic assumption: I wanted to use a method that was also unfamiliar to me: this time not to compose first and then record the whole thing, but to compose through recording, to create something "al fresco", so to speak, and to missuse Erik as my brush for the image to be painted. "Al fresco" is the metaphor for the non-notating creation, which no longer splits the creation into notation on the one hand and execution on the other. It is the term for the act of defining in the moment of realisation. 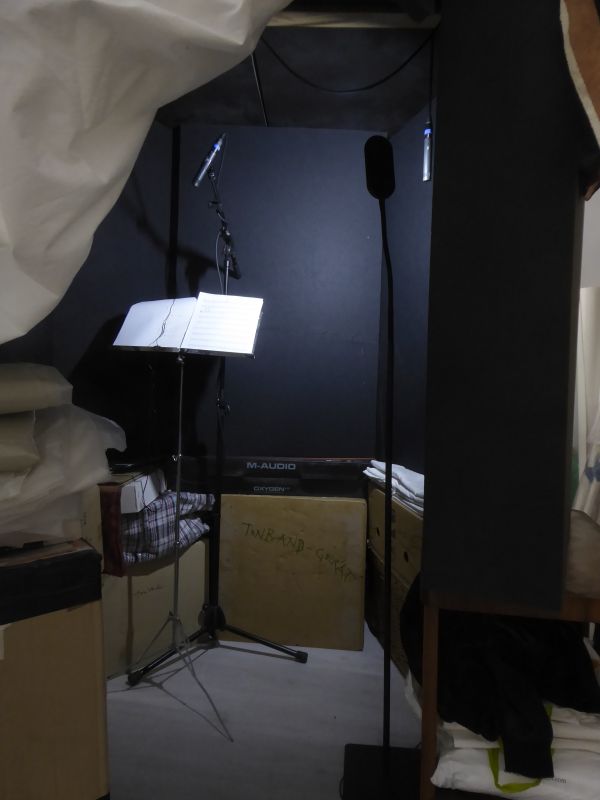 Then a recording environment had to be created. It was clear that a conventional recording studio would not be available for a period of several weeks - it wasn't supposed to be a 3-minute song. I also wanted to be independent and be able to decide freely whether we would work overtime today and cancel tomorrow after an hour. What we needed was a "home office studio", so to speak. This is where the Academy of the Arts came into play: Gregorio Karman, head of the academy's electronic studio, lent us 2 Neumann microphones and a professional interface. Then I built an improvised recording chamber in my studio and wired everything up.

I then tinkered with the "ultrasonic flute", so I tied the high organ pipes together to form a kind of chromatic panpipe with a range of 2 1/2 octaves (c4 - f6). Then we could start. 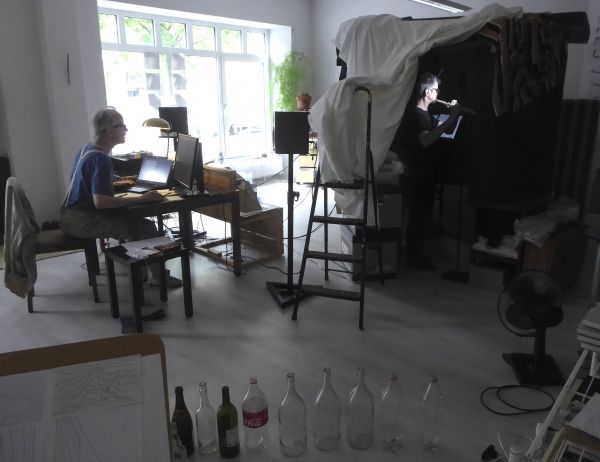 At the beginning of June we made the first recordings and then produced almost the entire piece in the following 6 weeks. Only a few follow-up recordings followed in September. The beginning consisted of a few recourse to existing things. To get in the mood and for the soundcheck, we began to record an old flute piece from the 80s that was never performed ("Überlegungen 19") - also because it might play a kind of forerunner role in this project, or simply because the 'toads/bombina'-textures reminded me of that old study. Then we recorded Erik as the speaker of a small concept from 1996. It's called "Jetzt" ("Now"):

one piece for 1 speaker
Text: "NOW"
nothing else
always just the word "NOW"
with different pauses
dontknowhowlong
1.2.96

We made the "different pauses" more concrete: Erik should say the next "now" when it is 'there', so to speak, nothing more - and rather avoid forcing deliberate differences of pauses. We rehearsed that until it was 'there' and then transferred it to instrumental playing. It was about the paradox of a 'non-quantifiable regularity' in rhythmic terms, which developed into a reading of the toads's (bombinas's) rhythm and finally the rhythmic principle of the entire project. Of these two 'oldies', the latter finally slipped into the prominent role of the beginning and the end of the piece, and the other into the appendix. 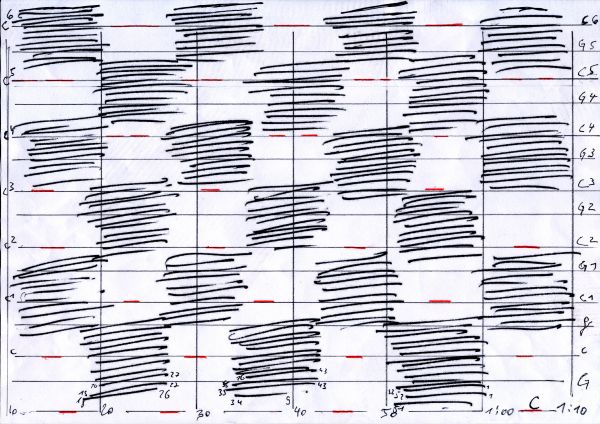 "Drawing IV" with indications of register and time grid (in 10-seconds intervalls)
listen to "Drawing IV", 1:02, all flutes, pipes and bottles: Erik Drescher (69 voices), player
note: low frequencies will not be represented on small computer or smartphone loudspeakers.

Another 'recourse' concerned the present, as it were: A piece called "8 Zeichnungen" ("8 Drawings"), which is exactly what it consists of, was only realized a few weeks earlier as electronic music. We gradually realized 6 of these 8 drawings plus a few variants with the possibilities of the 'extended flute' in mostly polyphonic versions up to around 70 voices. A 70-part one-man orchestra: that was perhaps the appropriate answer to the Corona restrictions, with the additional effect of not being alone with yourself.

It soon became clear that the overall picture would consist of a sequence of many short (e.g. one-minute) individual forms. Such single forms, individuals or 'Eingestalten' can stand on their own or combine to form higher-level architectures or organisms. Many of these polyphonic structures are exactly the work of one day. Finally, of the structure generators, the principle of iteration or 'copying' should be mentioned, whereby first a template was created which then, for example "one tone higher" was copied. In the third run, the copy was then copied, etc., as with "silent post". What exactly "one note higher" meant could vary. In most cases we did not work with notated pitches, but rather with definitions or drawings that retained a certain scope for interpretation, to which we could react from one recording step to the next. As with 'non-quantifiable regularity', blurring plays a decisive role in - so to speak - copying a microcosm of unmanageable nuances into the underlying, mostly redundant textures.

Then - in the middle of the main phase of the recordings - I came across the book "Against Nature" by Lorraine Daston, where she discusses the concept of nature and describes what it is capable of doing in our heads - and unfortunately also outside of it. The title we borrowed from this book is not directed against nature - because nature does not exist; it is directed against our concept of nature soaked in morality; Or: it means that nature that we all are - a honk concert as much as the medially conveyed recording of a toad pond - in contrast to a concept of nature that tries to maintain a categorical separation from everything technical, fabricated, human, and clings to banish nature to something external, to an outside.

listen to "Hupen" ("Honking"), 1:07, form 50 from "AGAINST NATURE", field recording of a truck demonstration of the showmen in Berlin at the Brandenburg Gate against the Corona measures on July 2, 2020, player


Hybrid (Footnote on aspects of presentation)

Our "extended flute project" was originally started as a project for sound carriers, not for live concerts. In a sense, it was also about the impossible, about something that would be realistically, i.e. live, unthinkable: an orchestra made up of 79 glissando flutes, or 72 "ultrasonic flutes". As the work progressed, however, a certain dialectic developed between solo and tutti, or between a single model and mass copy. And thus the first considerations for a hybrid of live performance and play-back came up. Finally, there could be two versions that would be slightly different, one for sound carriers alone, the other for the combination. The hybrid version, of course, which was not originally planned, has to be tried out and tested in practice before it can be officially approved as an Anti-Corona agent. [Footnote to footnote: On Feb 24 2022 the hybrid version was successfully premiered by Erik Drescher at Berlin's KM28. Immediately it was clear that this version has its own right. It highlights quite different aspects than the CD version, not only in terms of the "dialectic" mentioned, but also in terms of the physicality of certain sounds exploring the limits of human and technology.]

What composing always has to fail (Footnote on 'blurring')

Traditional composition, therefore notating composition, has to be determined. As a result, deviations from the determined are maybe accepted, but hardly can become a formative means. Aiming at the nuances of the deviation from the outset - and not just afterwards - is little supported by notation-based composing. Notation escapes something. Many composers feel this restriction and work with - or rather against this problem, invent notations that are not reproducible 1:1, or even unplayable, which, of course, generates deviations but does not 'compose' them. It makes a difference whether I only accept deviations or create them. 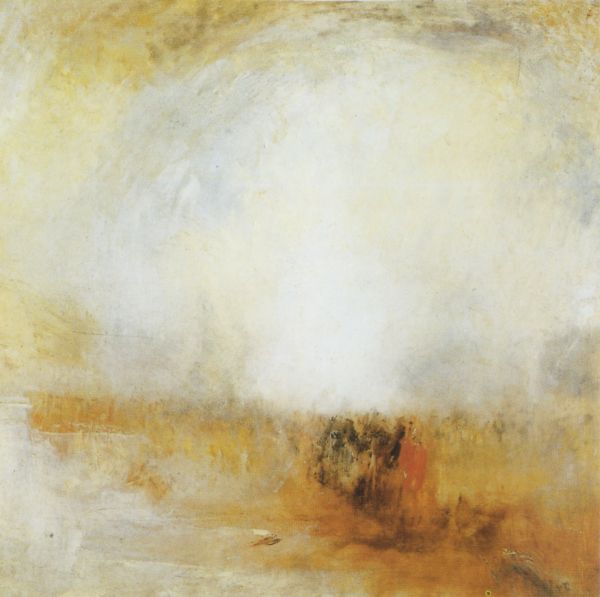 ... dense bundles of high tones near the ultrasonic limit are in my imagination associated with the glaring light of William Turner ...