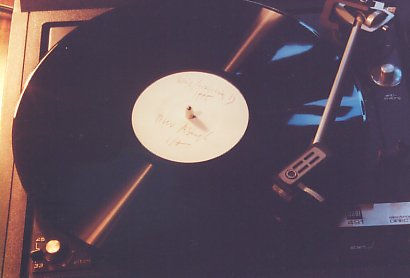 The piece is a vinyl record that has been pressed without sound in a limited edition of 7. The only sound that is emited therefore comes from the dust and scratches in its (very narrow) grooves. (Play loud!)


Weiss / Weisslich 13 was not planned, it happened. I was thinking of an ensemble piece made from layers of various objects and noise sources (an empty tape, a TV without antenna, etc.) and therefore I asked a vinyl company for an empty record. 2 weeks later the postman rang and brought 7 exemplars of that. Once I had it in my hands I decided that this had to be a piece on its own - while the other concept was never realized. (English un-edited)

see also
- the empty record in combination with instruments - in:

"The Orchestra", 2. Act of Cityopera
for sound example go to: THE ORCHESTRA, Intermezzo 11, "Record"

"The Audience", 7. Act of Cityopera
for sound and video example go to: THE AUDIENCE, SCENE 7a ("Dance")


you can order the record at the publisher: