The Audience, 7th and final act, to take place in the Helmut List Hall with the Ensemble Zeitfluß Graz, is founded on the aesthetic parallel action of music and film under the heading of the "utopia of art". A piece for two films, two ensembles and two computer-controlled pianos. For Peter Ablinger and filmmaker Edgar Honetschläger, The Audience has to do with a complementary widening of horizons - for the innovative experience of cinema in alliance with the Klangrede of an authentically modern music. Particularly in this context, the aesthetic/topological research of the Cityopera Graz is fully concentrated on the enrichment of our "sensory consciousness".

catchwords by Peter Ablinger for
7th Act (the Audience):


The film The Audience by Edgar Honetschläger presents us with specific new images of cities, the impetus of which is a reflection upon the global phenomenon of "City". The film itself is projected simultaneously on two screens, on and between which, filmed and painted images of reality can shift and slide back and forth and over each other. The "soundtrack" by Peter Ablinger, for city-sounds, recordings of speaking, and instrumental sounds (2 live instrumental ensembles and 2 computer-controlled player pianos distributed spatially onstage, thus reproducing the stereo effect of the prerecorded elements) was performed live by the Ensemble Zeitfluss Graz, under the direction of Edo Mic'ic' and Nassir Heidarian. The collaboration of Ablinger and Honetschläger represents the possibility true artistic renewal - the utopian alliance of film with an authentic music of the present.
from "IN BETWEEN", an essay by Wolfgang Hofer

The poem becomes - under what conditions -
the poem of a person who still
perceives, still turns toward phenomena,
addressing and questioning them.
The poem becomes conversation... [Paul Celan]

Scene 8 (Buenos Aires) from THE AUDIENCE at Helmut List-Halle, Graz,
with Ensemble Zeitfluss Graz under direction of Edo Micic and Nassir Heidarian,
and the two computer-controlled player pianos of Winfried Ritsch; 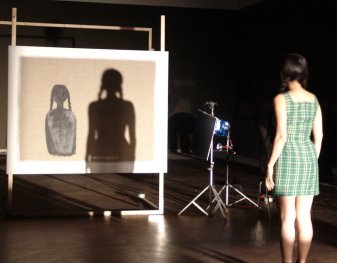 [] It is not the utopia of art that outdoes works, but on this occasion the utopia of the works that outdoes art. The so-called whole does not exist - here it is precisely the untrue. In its entire make, the Stadtoper Graz is concerned with the emphatic process of a fragmentation and segmentation of opera as a traditional art-form - under the specific sign of hearing. In literally deconstructing opera's form-constituting individual elements (thus Opera/Works), the laying free of these parts' potential peculiar dynamics and latent energetic resources are examined. What, in the process, in terms of innovative tendencies, is brought to light, follows in a sense the device of Walter Benjamin's by which a very precisely observed cell of reality is put into a position where it makes up [stands?] for the rest of the entire world. Just so, Peter Ablinger's broadly fanned artwork, in its diverse disciplines, has in the end, as imaginary escape from the banal, an also concretely namable goal [-wonach eine wirklich genau angeschaute Zelle Wirklichkeit den ganzen Rest der Welt aufzuwiegen imstande sei]. In the summons to a comprehensive departure ("Depart" in original). Hanging on a maximization of the art of our perception. On heightened attention. Having to do with the emphatic waking of the senses.

And if one can't immediately change Being, than at least the sensorium of one's consciousness. And also, if we (still) can't really change the world, than at least our perception of it. Then perhaps something else, something other, might still come to pass [Dann mag vielleicht noch etwas anderes dazwischen kommen]. And not just [in] art. Text: Wolfgang Hofer, translated by Bill Dietz


youtube video clips:
with the two parallel films and the doubled live-ensemble plus the two computer controlled pianos

THE AUDIENCE, detail from scene 5 ("Hollywood")

THE AUDIENCE, SCENE 7b ("Anna counting")