The Singing, the 1st "act" of the Cityopera Graz, has only indirectly to do with the phenomenon of vocal expression, and is more so an extensive acoustic survey of the phenomenon 'City' (it is the city itself that sings); an encyclopedic city/sound catalogue, an urban audio library comprising 36 CDs and approx. 400 recordings from various sites in Graz.

catchwords by Peter Ablinger for
1st Act (the Singing):

Overture
Fertile ground for the further acts
Stocktaking
Contingency
the Nothing-in-Particular
not Art!
THAT-WHICH-IS
Phonography
pure hearing
the sense of hearing isolated from all
other forms of perception
isolated hearing (headphones) 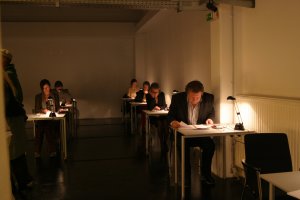 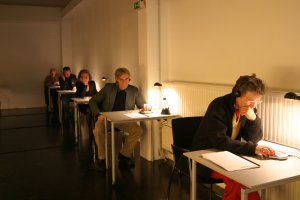 An acoustic map of Graz: the city as sound library: the city become song. Song no longer understood as vocal expression, but as city sounds and noises, collected and documented over a 28 yearlong process. The fixed installation of this encyclopedic city-sound archive, including approximately 400 recordings on 36 cds, each cd with its own cd-player, table, and chair, was accessible live for more than 20 days in the ESC Gallery, Graz. Selections from "the Singing" serve also as starting points for the electronic playbacks in the 2nd and 7th Acts. Text: Wolfgang Hofer, translated by Bill Dietz 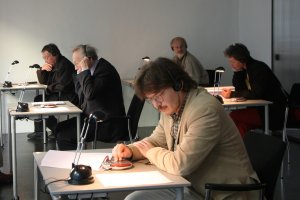 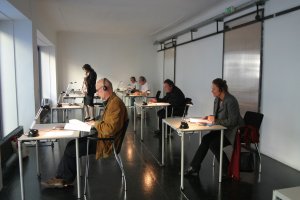