back to: engl. texts

- my "patron saints" in developing an anti-perspective conception of music 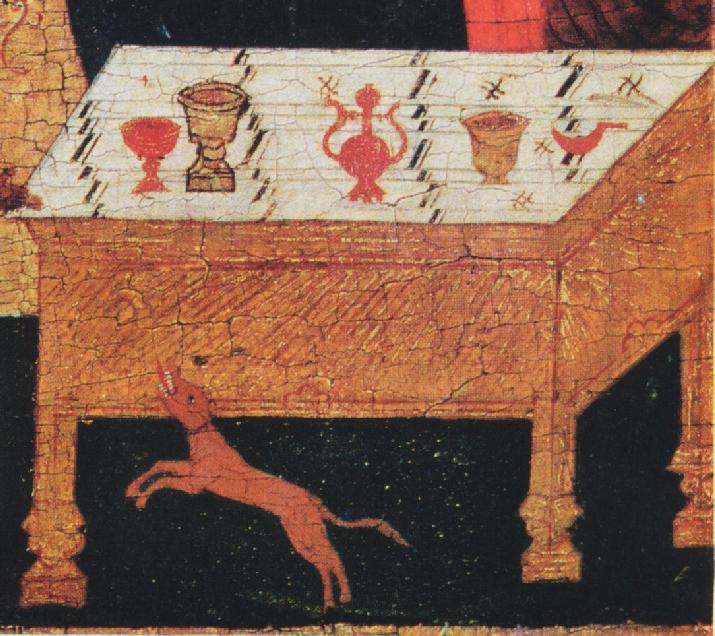 To what extent can we speak of "inverted perspective" with respect to listening.

Inverted perspective does not organize space from the beholder's point of view, but rather from the point of view of the represented figure.

The central figure: Neither the composer nor the "ideal listener" constitutes the focal point of the perceptible, but rather "a" listener, any listener, inattentive ones included. And instead of the perceptible constituting a formal trajectory, it is the perceived which creates auditory space. The center of this auditory space is each listener, at their respective physical locations in the room and in their respective mental locations within thought.

"...from the figure's perspective, lines come near to correspondence."
Nearing. A process, a procedure.
Nearing.
Nearing as a process which can only transpire if music, sound, is basically immobile: sound is what listens to us, observes us in great detail. For it is only when sound itself is immobile and absolutely "attentive" that it can paint a portrait of us, the inattentive, the mobile.

(Attention is thus no longer a demand on the listener. It acts as a demand only for music itself. Listeners' attention is more of a hindrance, a cramp. What attention focuses on is too fixed, too limited. Inattention implies an open-ended rambling. And only this can lead us to an "encounter," to something that wasn't fixed from the beginning.) 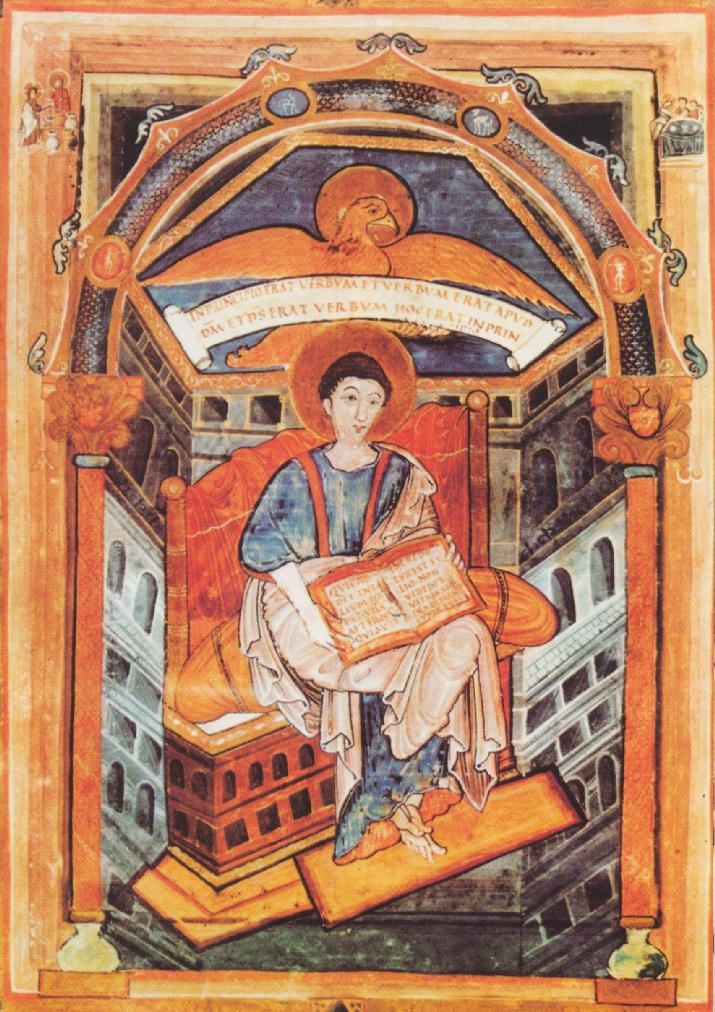 
Although the central perspective was already known and had long been used in classical Roman painting, it was ignored by Byzantine painting, or better: it was confronted with an alternative: the inverted perspective.

from a Wikipedia article on reverse perspective in Byzantine painting:

In Orthodox culture, icons are symbolic references to the presence of the divine, which has been transformed into the representation of saints and connection to relics. From the historical associations of what is shown in the picture, the observer confirms this presence. Icons thus represented timeless and spaceless perspectives of God's presence. Using the reverse perspective provides a representation of the view of all levels that are actually not visible to the human eye simultaneously. This is the medieval representation of the vision of the divine in which all levels and perspectives are presented at once. As a result, they are not perspectives of man, but of a divine figure as she would see the scene. A human observer is able to transcend time and space from the point of view of different levels, which in perspective come from a divine vantage point and all-encompassing knowledge.


MONOPHONNY. I compare the monophony in music with the two-dimensionality of the image, Gregorian chant with icons. Then the polyphony is not a further dimension, but only its illusion. Thus, (canon-)imitation and perspective of the Renaissance are comparable. (Unpublished excerpt from: 'Nach Westen', 1989-2001)

Has anyone ever observed the connections and interchanges of vanishing point and fugue in more detail? About the thorough construction and imitation of space in the two-dimensional surface and the (canon-)imitation in musical composition? Of the relationship between perspective and canon?

The expression "punta di fuga" (vanishing point) has it all. The rationalizations of the image? or pitch space in canon? or perspective construction both are suspended/conjuncted in it.

The historical parallel cannot be overlooked. The forerunners of canon technics and two-dimensional spatial representation go back to around 1300 (English canons; Giotto), and the respective systematic application can be traced from the 2nd third of the 15th century (Florentine painting; Burgundian clay setting).

I hope I'm not telling old hats. But I also want to single out only one point that is essential to me from the parallel history of perspective and canon, and that is something like an introspection of the system.

Recently I had an older "Kunstforum" volume (vol. 105, "Das gequälte Quadrat", 1990) in my hand, in which Peter Weibel writes about perspective. He writes: The perspective is an observation of the gaze.

It is often enough to exchange a few words and everything is there: the canon is an observation of hearing!

I continue to interchange: "In 'I hear myself hearing' (Paul Valery) the other side of consciousness is formed, the mode on which the cogito is built and the subject understands itself as thinking is formed."

And so on. In order to pursue these considerations, I can only recommend this or a similar reading with exchanges.

Before I break off, I would like to mention the (non-?)relationship between canon and the verticalisation principle.

When - towards Feldman - someone spoke of his Piece for Four Pianos as "canon" he was quite surprised. He never thought of it that way. All 4 players actually play the same piece "approximately at the same time". I felt the same way with the verticalisation/condensation. Of course, in a certain sense you can say that it would be a 10,000-part canon with intervals of a few milliseconds. But cannon starts in the millisecond range, that means: always. Escape (fuga) is no longer possible.

In English it is called "vanishing point". And if I translate vanish not as fleeing but as disappearing, then we're a little further ahead. Because the connection between canon and disappearance makes it easier for me to make friends with it: condensation/verticalisation as the deconstruction of canon and perspective, as their erasure, as the end of the representation of space and subject.

But what remains when the representatives leave the room?

Those who are not intimidated by empty halls will find it.

1/98 the original german text is part of ANNÄHERUNG Texte.Werktexte.Textwerke

Proportion canon ('Proportionskanon') in particular rationalizes the possibilities of depicting proximity and distance compared to the preceding. Something that could later count on a more immediate effect through instrumentation and dynamization. In the age of the Dutch ('Niederländische Polyphony'), however, the vanishing point-like connection of the individual voices in the standardization of motifs is largely equivalent to eliminating what is fundamentally different. Even in perspective space it is no longer possible to put 'before' and 'after' into the picture at the same time, to immediately visualize different times of a story or levels of representation - or the representable as such.

(Canon-)Imitation ('Durchimitation') and perspective are also the stable basis for the systematic standardization of thinking, which negates the existence of the different, of the other and seeks to transform every contradiction into a continuum of small-step transitions. 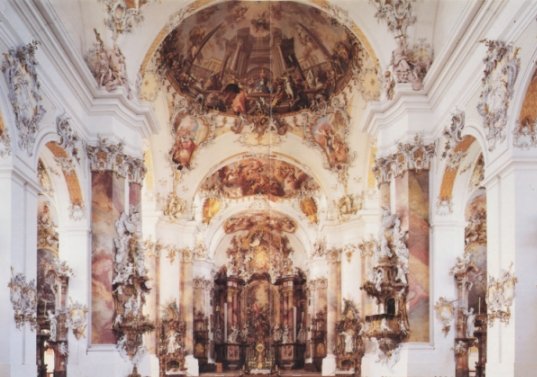 They make the world more vivid. This means that vividness is a result of reduction, a cognitive effect-not truth! Three-dimensionality is a medium for recognition, not itself an object to be recognized. (In truth, we are more engaged with the medium than with that for which it was created).

Compare with Johann Michael Fischer (~1692-1766, rococo architect who designed the abbeys at Ottobeuren, Zwiefalten, Rott am Inn, etc.): he uses perspective in order to refute it, to strip space of its illusions. He uses optical illusions to unmask spatial illusions (the ones we all live with).

Johann Michael Fischer: His life's work consisted of constantly proposing new solutions to resolve an old European conflict: the one between basilica and central building, between longitudinal and round building, between pacing and omnipresence, and one could continue: between "path" and "place", between teleology and presence, between concert and sound installation, between "thinking" and "listening".

Antiperspective in Zwiefalten. Architect: Johann Michael Fischer. He succeeds in making an extremely long room with a basilical floor plan look almost like a round building.

Noise-static Noise-envelops space and time like a jewel wrapped in cotton. Noise is the most precise portrait of both time and space. Both are preserved in it. Preserved and dissolved, as in a liquid. Conserved. Reduced to their real, non-fictional properties: as any measurable change slips away, time is stripped of its illusion of sequence, and (along with measurement), of the cultural (i.e. second-hand*d) idea of decay and progress.

Space is stripped of its illusions of breadth and depth, as all spatial dimensions (including temperature and the materiality of a room's boundaries) are reduced to a concrete timbre, and the whole illusionist, perspectivist notion that one-could-be-somewhere-else is debunked.

But thirdly, Noise is the perfect portrait of fiction itself. The portrait of the listener and of listening, complete with their projections onto Noise. Noise is not free of illusions. The illusion it takes away (with respect to space and time) returns as a recognizable illusion of ourselves. (It gives us an idea of our perception, not perception itself-we can't reach that far.)

Noise portrays the concrete essence of space and time; they imprint themselves in Noise as on wax tablet, Noise molds them as though for a cast. And: Noise is the mirror of our illusions, which is held up for us to learn something about our perception.


Abolition of the room with the Asam brothers. The dome of Weltenburg on the Danube. The fact that between the oval edge of the dome and the painted flat dome there is still a space of approx. 20 m in height is "canceled". Another construction of 'making-disappear' concerns the ingeniously guided natural light, the origin of which is hidden, which leads to an increase in the "unreal" effect. The high light drum and its giant windows invisible from the interior are only visible from the outside. Abolition of the room at Turrell. One would think that Turrell was apprenticed to the Asams. The methodically exactly same double strategy is at work: As with the Asams, the frame serves to disguise the location of the picture. The blue rectangle is of course not flat on the wall, the blue is a separate light space behind the rectangular open wall, which is illuminated with indirect blue light. Again space is used to make it disappear.
James Turrell, Danae, 1983, tungsten and ultraviolet light, courtesy of Mattress Factory, Pittsburgh, Pennsylvania, CC BY-SA 2.0 de

The Colour of Nearness


back to: engl. texts